The Power: Embracing My Inner Mange

When my "quirky" daughter, Rainbow Sparkle-Dazzle (RS-D) (she wanted to name herself that when she was little) was in Kindegarden at the Catholic School, I was often so proud of how different everyone thought she was. I mean, I had learned years before not to recoil in horror when her chubby fist would reveal such shocking pets like a Stink Bug, rolly-polly bugs and the endless lizards that came home in little nests she would make in her lunchbox.  The sweet teacher would always put a sticky note on her lunchbox to warn me so that I wouldn't have a heart attack when the dazed lizard would try to escape after being knocked about inside her lunch box all afternoon.  In fact, she really was amazing at catching those little suckers.

Have you ever seen how fast they run?  It was as if she anticipated which way they would run that was the key to her stellar lizard catching success.  Even the boys were impressed.  Everyone has their "gifts." 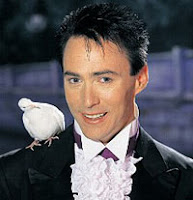 Over what seemed to be a freaking eternity fraught with fighting back the gag reflex, I learned to see the beauty in all creatures big and small...mostly small.  And I learned to see the beauty in RS-D's unique gift with animals.  "Perhaps she will grow up to be a vet" I thought despite her complete inability to do any kind of school work.  Nonetheless, I remained steadfast and hopeful and RS-D had every animal under the sun.  She had a Gerbil whom she named Lance Burton after the Vegas magician because he would disappear all the time. (Incidentally, my husband used to work on his TV Specials so when the vegas Lance would call our house he would announce himself as "Hey, it's Lance Burton.  Not the hamster." Swear)

Anyway,  do you know why doctors in the emergency room call Gerbils "Staple Guns"...we do.  She had two mice named Spotty and Brownie which were so much a part of her childhood that they are now part of our family lore and I have dedicated a single post to them.  For the Science Fair, in third grade, she even ordered chicken eggs and an incubator and diligently tended to the eggs for almost a month until they hatched in her bedroom.  That was a huge accomplishment for a kid with the attention span of a gnat. With a big win looming at the Science Fair, I even let the chickens live in her bathtub for the month leading up to it.  I have to say, I relished in the thought of her winning First Place in front of all the "judgmental moms" proving that her "quirkiness" could really be a bonus but she lost out to a mom (oops, I mean a kid) who figured out the algorithms of the undulating waves on the beach (hummm, in third grade, imagine that?) 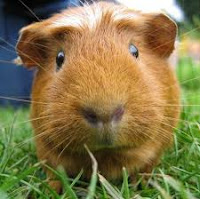 Eventually, RS-D got a couple of guinea pigs Honey and Mocha.
They were pretty cute and she loved them so much that they slept in her room in a very roomy cage.  She even performed a Britney Spears song at the talent show holding Honey in her arms. ( It was adorable but she lost out to a kid who did a well rehearsed version of Etta James' "At Last"complete with a backup track. ) But no one told me how prolific guinea pigs could be so when Honey got really fat, RS-D insisted she was pregnant. Try to imagine my shock when Honey gave birth to 6 babies and then immediately after expelling the the bloody afterbirth (which thankfully she and Mocha ate so I didn't have to clean it up), Mocha had his way with her and poor Honey was pregnant AND nursing her babies at the same time. Men!

It was a lot of fun for the neighborhood kids to come over and visit all the babies.  We decided the guinea pigs needed to run around outside (and the smell was killing me) so we put a fence around the dog run and put a chicken house out there to accommodate the Honey-Mocha clan.  The kids named all the babies after all Pokemon characters and decorated the fence with Pokemon cards.

RS-D eventually heard about a 4H Club that showed guinea pigs in contests. I immediately had images of RS-D living a fresh scrubbed life like Fern from Charlotte's Web so I signed her up.

We drove way out to the farmlands on a weekly basis to hang with the fellow guinea pig lovers.  RS-D loved it and I tried my hardest to bond my fellow guinea pig lover moms. It was a tough job becasuse when I first arrived at the Guinea Pig Den Mother's house, I was shocked to see that she had lined two of her dining room walls with floor to ceiling guinea pig cages!

There had to be 25 cages per wall and they were on wheels so she could roll them out in the back yard for cleaning. I am not kidding!!!  I was in a serious guinea pig situation. 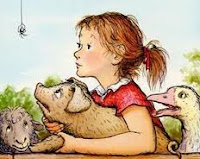 Eventually, the Big 4H Show came to the next county so RS-D eagerly signed up and we drove off with her dear Honey sitting on her lap.  I had never been to a 4H Show and aside from it being held right next to a Gun Show, it was very innocent and Charlotte's Web-ish. The kids all seemed so sweet and I was thrilled for RS-D, who was dressed in the prerecquiste jeans, white shirt and 4H scarf.  I admit, it was a teary moment for me as I watched her proudly place Honey into the "Cavy Contest" (I adopted the insider terminology.)  I was beyond dreamy watching this adorable tableaux of motherhood unfold before my eyes...with Paul Lynde and Debbie Reynolds singing the songs from Charlotte's Web as my misty musical underscore. 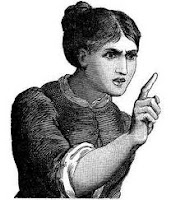 Shock and awe might well describe the reaction of the two toothless guinea pig judges who insisted RS-D immediately remove Honey from all the other "sows."  RS-D was perplexed and I didn't feel my feet crunching the stupid hay as I stomped over to inquire about their mistreatment of our dear sweet, mother of 13, Honey.

"She's got mange!!" they indignantly and I am not kidding, haughtily shouted for everyone to hear.

As I tried to shield RS-D from the elbows of the other kids who were angrily reaching over to grab their perfect guinea pigs from getting any where near RS-D's, my eyes found our Guinea Pig Den Mother.  I quietly shrugged my shoulders and told her what the judges said and she frowned.  At first I thought it was out of sympathy for RS-D but as she began to give me the top to bottom on what mange actually is (contagious and mites is all you need to know) she actually insinuated that I needed to brush up on my guinea pig mothering skills and that perhaps we should look into buying RS-D a "show quality" guinea pig (for a couple of hundred bucks)  who would not live in the "outside" family quarters/dog run. As the words tumbled out of her mouth like Charlie Brown's teacher, I couldn't help but think that her two walls of show quality Guinea pigs were probably worth a heck of a lot of money.  But I bet she didn't have a Guinea pig who made such a difference in so many people's lives.

Mangy Ol' Honey meant the world to me, RS-D, The Smarter Spicoli, The Weatherman, The King, Mocha, all her babies and the neighborhood kids.  There is always a little part of me that wonders if animals know what is going on around them and, at that moment,  I secretly hoped that Honey didn't suffer the indignity of her ordeal.  However, I must say, I walked out of that 4H Show proud to be Honey's mother!

RS-D did get a ribbon for being "part of the 4H Show" and, thankfully, she really didn't grasp the whole "mangy guinea pig" debacle. I made sure I took a picture of RS-D and Honey and the ribbon and I put it in the newspaper. 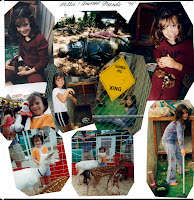 RS-D was so proud of Honey and didn't participate in the 4H program after that big show because she was more interested in "playing" with her guinea pigs and not worrying about mange.  And, I was so proud of RS-D for finding the real reason to love someone who is really different.

I try to do the same.

Parental SUPERvision power:  Have fun, play and not worry about mange (or judgement or fear or the "what ifs.")

Posted by queenbeach at 5:40 PM

Yep, I scored the parental hat-trick! 3 kids with ADHD and one even has Asperger's! But the real fun happens when we insert my husband and I into the equation! We ALL have wicked ADHD and our house is...well...a whirlwind!
I was born into a huge family in Connecticut and looking back, all five of us kids had ADHD, too! No wonder my parents didn't live into old age!
Now that I live in sunny Southern California at least my crazy world is surrounded by epic beauty, thank goodness!
Since my last kid was diagnosed with Austism I turned to my friends in the community who also had children with disabilities and we formed a foundation to support the families and teachers in our area.
I was appointed by the governor in 2007 to sit on the Advisory Commission for Special Education for California so I have been fortunate to work with people so much smarter than me about everything to do with Special Education!
Now that I have two kids in college and only one at home, I have been getting back to work part time, as a TV writer. Last summer I finally got a "bit" through the editors and Betty White uttered my first lines on live TV! Pretty cool!
My blog embarrasses my two older kids and my Aspie kid hasn't really been told what evils his mother is writing about, yet! Somehow, as I survey the debris from my cyclonic life with my family....I have managed to find my humor!

Promote Your Page Too