The Power: Photograph and Document your Coolness! 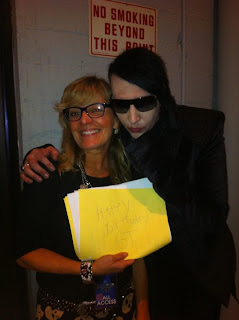 Jump cut to my son's 20th birthday last night.  As I worked backstage at the Scream Awards, I saw Marilyn Manson walk bye and thought "how cool would it be to send a birthday greeting to my son?"  So, here is my latest acquiesence to embracing my kids' uniqueness.

To my son whose unique coolness became obvious to me at the Keep Christ In Christmas program...I've come a long way!!!

Wielding my parental SUPER power has never been more fun!!

The Power: Laughing! What is a perfect kid anyway?

If you are reading my blog, this is my first posting.

And, if you are looking for someone who has all the answers to raising three kids with ADHD including one with autism, click off this right away.

Though I have tried to read "everything" about our family's "issues" (yep, my husband and I are also cyclonic ADDers) I have made every mistake possible, my kids are STILL incredibly difficult and on many occasions, I look to a glass of wine or two to steady my nerves.  Sometimes I feel like I have survived a war...but its Ground Hog Day for me....like an annoying skip in an album.

My oldest, The Smarter Spicoli, just turned 20 and, remarkably, attends college in San Francisco.  From the time he was a toddler he was like chained lightening and disrupted everyone and everything around him.  Let's just say he wasn't the first boy on everyone's birthday party list.

So you can only imagine my pride on the day HE was selected, from a group of very well-behaved 3rd graders at his Catholic school, to read his "Keep Christ In Christmas" award-winning paper at a ceremony at the prestigious religiously affiliated university in our town.  MY kid had garnered school-wide recognition…take THAT you mean mothers of well-behaved kids!!

I walked into the theater smiling (albeit fuck-you-ing-ly) and all the good families were sitting there with their well groomed, well-behaved kids.  I definitely didn't fit in and I knew it by the surprised looks on their faces when they realized my "devilish" son had actually written something award winning! So I have to say, I relished in that moment.  Yep, it was only a moment.

Ok, so there on the stage were the MODEL representatives from each class, quietly and solemnly sitting in chairs waiting for their turn to proudly read their papers on Keeping Christ in Christmas.  And then, there was my son, Spicoli.

To say he was dishevelled was an understatement.  I never got the chance to comb his hair for this prestigious event.  I had a wild toddler AND a fussy baby (didn’t know he was autistic at the time) and because the event was at dinner time, let’s just say, the lucky ones got to rummage though the crushed boxes of “car snacks” as I sped to make it on time.

So there sat the Smarter Spicoli, hungry, dark circles under his eyes, shirt un-tucked, hair a mess and relentlessly squirming out of his chair right there on the stage.

After about an hour of nauseatingly sweet and artfully disguised stories written by most of these kids’ parents, it came time for Spicoli to read his winning essay.  He had written it all by himself  (swear) so my pride was tinged with a touch of indignation, too.

My husband (who cut his meetings short as to not miss this amazing moment) and I sat there rather dazed in the audience.  We were so proud...finally, we were going to have a chance to be the parents of a good citizen.

But, something was wrong.  We held our breath as we noticed that Spicoli looked angry as he walked from his seat on the stage and up to the mike.  Angry?  Why would he be angry at the Keep Christ In Christmas event?  Something was wrong?

We weren't sure if he was as fed up with the sugar fest that we were all enduring or he had had just about enough of trying to "sit still" but when he got up to the mike...I thought I would faint from lack of oxygen.

He began to read the opening lines of his story, which was uncharacteristically sweet and heartfelt.  But, I couldn't relax and soak in the moment…I had been well trained in the unexpected "other foot" droppings.  My intuition was on "red alert."

All of the sudden, as he stood at that mike, the Smarter Spicoli stopped reading his paper and looked around at his newly found holy "friends" on the stage.  He looked into the audience at the nuns, priests, teachers and perfect families.  He must have caught a glimpsed of a couple of his co-horts from the "dark side" who were dragged to the event by their parents.

He crumpled up his paper, grabbed the mike and said  "I don't believe a word of this x#!*@!" and walked off the stage. 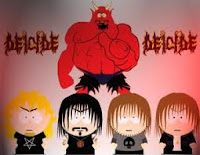 The air sucked out of the room.

No one laughed to take the horror out of the moment!  I was mortified beyond anything I have ever experienced.  To make matters worse, my toddler was manically giggling as she ran up and down the stairs of the theater and my baby was making those noises they make when they are being forced to sit still.

It was brutal as all eyes turned to us.

Clearly, we were the worst family in the theater and perhaps our town.  I had to summon up every ounce of musical theater training and channel "my inner Mama Rose" and get the heck out of there before something worse happened.  As if that was possible.

I didn't want The Smarter Spicoli to see me crying when we got into the car because I didn't want to make anything any worse than it was.  But when I asked him why he said that on the stage in front of 300 people, he said that he was embarrassed by how "uncool" looked in front of his friends.  He was proud to be the "bad guy" in the class and didn't want the other kids to think he was lame.

I guess I couldn't blame him.  The perfect kids (and their families) were kind of lame (really lame) but I couldn’t imagine explaining that reason to anyone of the parents who thought he was “the anti-Christ.”

So, I reluctantly accepted his reasoning and tried to get my head around his impulsivity.  I tried really hard to accept that fact that I had a kid who would go “that” far to be cool.

My mortification became a familiar foe that day and one that I would have to struggle with on too many occasions in the future.

The power of my parental SUPERvision?  The ability to laugh at the ridiculous circumstances that often defines my life...and that is often times a real struggle! 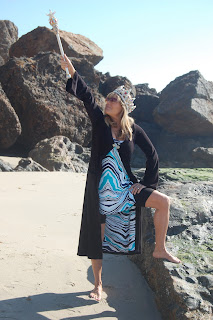 Yep, I scored the parental hat-trick! 3 kids with ADHD and one even has Asperger's! But the real fun happens when we insert my husband and I into the equation! We ALL have wicked ADHD and our house is...well...a whirlwind!
I was born into a huge family in Connecticut and looking back, all five of us kids had ADHD, too! No wonder my parents didn't live into old age!
Now that I live in sunny Southern California at least my crazy world is surrounded by epic beauty, thank goodness!
Since my last kid was diagnosed with Austism I turned to my friends in the community who also had children with disabilities and we formed a foundation to support the families and teachers in our area.
I was appointed by the governor in 2007 to sit on the Advisory Commission for Special Education for California so I have been fortunate to work with people so much smarter than me about everything to do with Special Education!
Now that I have two kids in college and only one at home, I have been getting back to work part time, as a TV writer. Last summer I finally got a "bit" through the editors and Betty White uttered my first lines on live TV! Pretty cool!
My blog embarrasses my two older kids and my Aspie kid hasn't really been told what evils his mother is writing about, yet! Somehow, as I survey the debris from my cyclonic life with my family....I have managed to find my humor!

Promote Your Page Too